Digressions – Running, Resolutions, and Body Image: We Don’t Look Like That

It is New Year’s resolution season, so I want to take a moment to talk about how we see ourselves. Many people take up running and set a 5K as a goal because they want to lose weight and look better. We are constantly bombarded by images about how we are supposed to look and feel about our own bodies. The fact of the matter is, most of the messages we receive are designed to make us insecure so that we will buy something to assuage that insecurity.

Several years ago, I did the Navy Seals Fitness Challenge. The Navy took SEALs around to several cities to put civilians through the initial physical fitness test of swimming, push-ups, sit-ups, pull-ups, and running (in that order). I will talk about this more in detail in a future post, but for now, I want to show you how I looked on the day of the test, after some intense training. 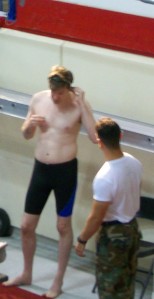 Not too shabby, right? If you look closely, I even have a six pack! It was the moment where I was in the best shape of my life. (So far, at least. I hope to surpass this level in the future.)

But here’s the deal, I didn’t really look like that. Take a look at this next picture, which was taken a few minutes later.

Wait, who’s that fat guy? That’s me! How is that possible?

It’s possible because that is how our bodies are. We can look very different in a matter of seconds depending on how we stand, what we are wearing, or a whole host of other things. This is why we can’t trust pictures – even when they are not photoshopped or claim to present “real beauty.”

This is not just me, by the way, take a look at this blog by Olympic 5K runner Lauren Fleshman on the same topic: http://asklaurenfleshman.com/2013/11/keeping-it-real/ (Actually, if you are interested in running, dig into her blog. There is a lot of great stuff there.) Her pictures show much the same thing.

Here’s the deal, though, whether my belly was a six pack or a keg, I felt great and could really move. I was in better condition than I ever thought possible. Despite the nice swimsuit pic, what I really want is not the waistline, but the swim time and the run time.

As we run through our miles of trials towards our resolutions, we should try to focus on the important parts of making ourselves healthier and stronger. We should forget about the magazines, mirrors, and scales. Let’s judge ourselves by our own standards starting with how we feel and move. The rest of it will follow us down the trails and end up in the right place as long as we keep moving.