Back a couple of weeks ago, I told you about how I was getting a different reading from Runkeeper than I did with my now-defunct Nike+ watch. So, as promised, I checked the Runkeeper distance using my car’s odometer. While it is not exactly the same route on the roads and sidewalks, it should average out.

Just as a reminder, here is what Runkeeper said my distance was.

So, it read the route as four miles over a route that I had been using as a 5K training run because it was 3.1 miles.

First, I drove the out part of the loop, stopped and checked the distance. Here is what the odometer said. 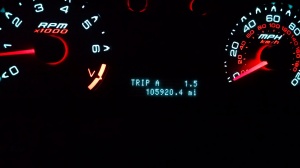 It was 1 and 1/2 miles just as I thought. So, I know that this works for the kind of training run I want to do.

Then I checked the entire distance.

This route is a 5K, which is what I was looking for.

This tempted me to give up on Runkeeper, but I ran a couple of other known routes before I did the odometer check and they seemed a lot closer to what I knew the routes to be.

The next step is to check in with Runkeeper customer service and see what they say. I will keep you posted. In the meantime, I have a 5K on Sunday. I’ll probably skip the tracking on that and just run, since juggling a phone can be distracting.

Let me know if you have had GPS issues, and if so, how did you resolve them?